In 2018 everyone is aware of the existence of solar energy and everyone knows how powerful it is, as well as the reach it has as a nearly infinite source that can be used for our everyday needs.

Just this year you can find solar powered solutions to provide electrical power, as well as heating and cooling solutions for households.

There are also a number of developments to handle water heating, cooking, means of transportation, and ongoing fuel production.

Solar energy is considered one of the purest forms of power with the cleanest radiation the human can endure because it lacks mass.

Solar technologies entered the collective minds of society in the early ’60s. Many entrepreneurs have pursued them as an alternative fueling method since those days, and they have evolved to new levels since then.

Photovoltaic panels are still the norm in this industry. They are regarded as some of the most functional means of using the energy of the sun.

The problem they have is still the one they had in the past: they take too much space, even in practical settings.

The good news is that a lot of technological breakthroughs have made their way to the mainstream and many of them are gaining momentum to boost the industry to new levels of growth.

It’s no secret that photovoltaic technologies cost a pretty penny when compared to fossil fuels. No matter how much the industry claims longtime savings in the future, not everyone can put a down payment of $10,000 for a basic set of photovoltaic panels in a mid-sized house. So far this is what is being done to fix the situation:

Using Magnesium Chloride:  This solution has been figured out by many companies in the industry that have figured out the shortcomings of the material they are working with to create solar panels.

Most of them are aware that silicon semiconductors need to be replaced for something more functional. A film layer composed of synthetic materials and a fragile coat of Cadmium Telluride in solar cells seem to be the most promising solution for more functional photovoltaic panels.

The Cadmium Telluride is obtained from Magnesium Chloride, a chemical residual that is already used in the creation of the panel and was considered until not so long ago, a useless product.

One of the most significant shortcomings of photovoltaic technology is that solar cells only convert 20% of the sunlight they get into electric power. This means that 80% of the solar light hitting them is wasted. Many scientists are looking for ways to fix this situation with independent research. So far this is what they have managed to come up with:

Light-Sensitive Nanoparticles: Developed in the University of Toronto, this type of light-sensitive nanoparticle is called “colloidal quantum dots.” So far the best way to explain what they are is a new and improved way to receive solar energy by using n-type and p-type semiconductors that are unable to bind oxygen, making them able to work outdoors without any limitations and by increasing their light absorption capabilities.

Use of Gallium Arsenide: A new material created by a team of scientists at the Imperial College University in London. These guys have created “Gallium Arsenide” a brand new element that increases the efficiency of solar photovoltaic systems by three times by doing some chemical tampering on the triple junction cells to optimize sunlight capture. The models created by the team currently use a sensor-driven view that can follow sunlight with “light-pipes” that bring the light in the system.

In current solar energy systems more power is lost than used by the existing technology.

Most photovoltaic systems allow the use of the energy in real time, but there is practically no development that allows for proper storage of the electric power generated by solar panels.

Even with programs in place that enable electric companies to buy these excesses of energy to dump them in the grid, there is a loss almost 50% of the surplus collected by the panels. So far these are the solutions that have been presented to deal with this matter:

Molten Salt Storage Technology: A solar storage system resembling a battery created by a team of researches back by a company named Novatec Solar.

The device is fabricated using inorganic salts to transfer the energy generated by photovoltaic systems and convert it into solar thermal using heat transfer fluids instead of mechanical oils.

The procedure so far allowed solar plants to operate at 500 Celsius, which of course translates into a higher power output and lesser storage costs.

Solar Panels with Built-In Batteries: A project funded by the U.S. Department of Energy, and developed by the Ohio State University. The team behind this project announced the creation of a solar battery that is 20% more efficient and 25% cheaper than any existing product in the market. The battery itself seems to have a built-in solar panel that allows it to be recharged as many times as it’s needed.

The industry has come a long way from offering energy solutions for households only.

More solar panel technology is being used in new and improved architectural solutions as well as many industries that are looking to decrease their CO2 emissions.

So far these are some of the most outstanding proposals that are currently being considered by governments around the world: 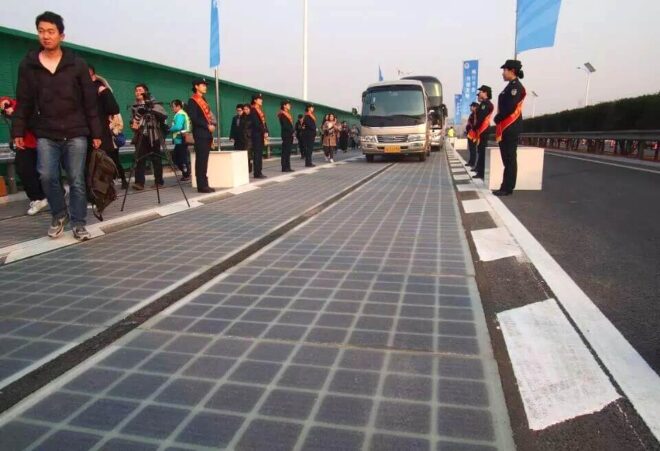 Setting Solar Roadways: Many teams are looking for efficiency and practicality when it comes to using the space occupied by solar panels.

Since they certainly take a lot of space, a few companies are looking to place them in highways and roads in the same way street lamps and posts are used to highlight a road.

This would make it easier to administer large amounts of power directly in the grid without taking large extensions of land.

Space-Based Solar Technology: Researchers in India, China, and Japan are looking to resurrect the tech that allowed space-based satellites to capture sunlight, convert it into microwave energy and deploy that energy back to earth.

New data seems to prove that this method can capture more solar energy and convert it properly with little to no waste. This would help overcome the challenge faced by solar panels placed in adverse conditions because of the weather.